WE HAVE OUR FANTASIES

SHANNEL: You remember you used to tell me the kind of man you’ll love to marry, your fantasy guy?


We see RICHIE that fits the description walking towards a florist shop in his well-tailored grey suit and white shirt.


INT. DIANE MANSION
Rick pulls Diane to himself; she withdraws slowly, her hands on his chest pushing him gently wondering what he’s up to, while he follows suit, bending slightly over her, until her back hits the couch. Rick is looking into her eyes.

RICK:{looking into her eyes} You meant you right?.. Tell me.

Diane calms, and looks into his eyes; her hands extend to his shoulders, her eyes blinking every sec

DIANE: And I love you more.

Rick closes up slowly to kiss her lips

INT. DIANE MANSION – DAY
Rick’s head is on Diane’s laps; he’s going through a magazine; he sees a slim sexy lady in it.

DIANE: Diane is not tiny you know?


WE HEAR HEELS KNOCKING ON THE GROUND


VANESSA, very slim and sexy lady, in a SHORT GREY GLITTERING GOWN, SILVER studs and necklace, with heels on ground catwalks in.


INT. RESTAURANT
Rick on his knee in front of Vanessa, opens the box and there sits a silver ring

INT. RESTAURANT
Rick puts the ring on Vanessa’s finger; Vanessa looks so happy with tears flowing down her eyes; she jumps up and they hug.

Diane stands, looking at them. Rick and Van see Diane, they are shocked.


INT. DIANE MANSION
Rick and Diane look at each other.

RICK: I have known Vanessa since we were kids, we were so close and we loved each other.

Diane looks at him, eyes squint.

RICK: Then we lost contact. When we saw each other again, it was like... the love was re-kindled.

Diane looks down, fondling her palm so hard in fury.

RICK (CONT’D): We fell in love again or I fell in love again cos she never stopped loving me, she told me she actually came all the way back from France, looking for me. I tried so hard to resist her but – I – I couldn’t . I love her.

Rick stands and walks out of the house. Diane watches him leave.


EXT. COMPOUND
Rick strides to his car in SLOW MOTION; eyes red and clouded with tears

SHANNEL:{Furious} What the heck! You of all people… God! {sighs in disgust, stands akimbo}Diane just made the biggest mistake of her life; she shouldn’t have left

Rick and Terry look up at her; she nods.

SHANNEL (CONT’D): Yea, she shouldn’t have; {yells at Rick}she should have stayed; strangled you, injected you, stabbed you or something---

SHANNEL(CONT’D): ---do anything she could to make sure there’s no single breath left in you and sent your corpse to that stupid girl of yours to marry or do whatever she wants to do with it. Then I would be so proud to call her-- my friend, you bunch of craze…

SHANNEL: What! Let me talk some senses into him, it’s fucking three weeks to their wedding! {To Rick} after all she did for you; she fucking made you Rick! and you pay her with that? She clothed you! Sheltered you! Took over all your responsibilities, fucking built the hospital you own now for you!


NOT EVERYONE IS PRIVILEGED


INT. TERRY HOUSE:BEDROOM
Shannel is pacing the room in worry, tears rushing down her eyes profusely as she paces and taps her phone.


FOR THOSE WHO DO, THERE CAN NEVER BE A BETTER FEELING


INT. RICK OFFICE
Vanessa and Rick laugh their hearts out

TRACY: Where have you been?

RAJ: Had to tidy up some things{he bows and holds out his hand to her}Dance with me

Tracy gives him her hand as she stands graciously. They start to walk to the dance floor

TRACY: Umm… Is there anyone else in this house?

RICK(V.O): I love you Diane and I can’t even say why. All I know is whether you are fat, thin or-- green; I’ll still continue to love you

Diane and Rick kiss so hard in tears

Diane leans over the railings, taking fresh breeze. Vanessa is some steps away from Diane, leaning over too with her hands clasp together.

Diane looks at the engagement ring on Vanessa’s fingers and looks away into the night.

VAN: Oh he is fine, he’s so sweet, he loves me and I love him so much.

TRACY(V.O): What the hell is that tramp doing here?! And you are even talking to her? I expect you to throw her off that railing!

SHANNEL: And now; who knew you would end up loving madly the very opposite of what you wanted, well except he is handsome?

DIANE: (on phone)Don’t forget, you don’t know where I am, you’ve neither seen nor heard from me, huh?

TERRY: You haven’t heard from Diane?

TV SERIES IN A READ 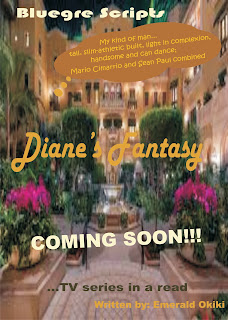